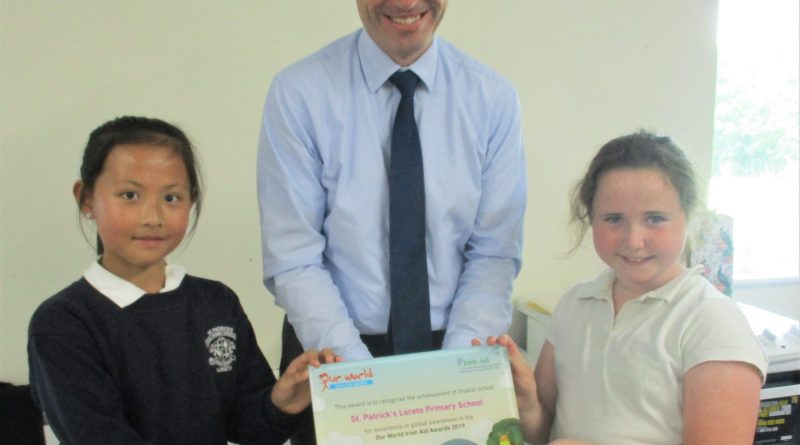 This year, Miss Dunleavy’s third class, participated in the Irish Aid sponsored project, ‘Leave No One Behind’. The project was about Irish Aid’s work in seven partner countries and the role of the UN Global Goals for sustainable Development.

On the 4th April, the grandparents came into our school to the art corridor. We were talking to them and teaching them about the global goals for sustainable development.

In my group there were four people – Emma, Ciara, Ava and me. I wrote some interesting facts about refugees; Ciara wrote a poem and Emma pretended she was a refugee called Milan and wrote a letter to Irish Aid. Ava wrote about the refugees in South Sudan.

There were other groups called the Karamoja group, the Leave No One Behind group, the Global Goals group and the Links Group.

I was impressed that loads of our grandparents came to the presentation. I learned that climate action is so important and that we need to achieve the goals by 2030.

We were thrilled to hear the news that our project received a merit award and we were presented with our plaque by Mr. O’Doherty on 20th June 2019 at a special assembly. The school was also voted the Best Newcomer as this was our first year participating.

By Ava Vahedi, rang a trí.