On Tuesday, 12 of January 2010, a huge earthquake hit Port-au-Prince, the capital of Haiti. The homes and lives of many people in Haiti were destroyed. The world watched the horrific images and videos on the television and pictures in the newspapers. Like most people, Ruth and I were distraught when we heard the breaking news. That was when the idea for the fundraiser all began…

We thought about ideas such as St. Patrick’s Got Talent, Pet Day, Cake sale, Non-uniform day and many more, but the staff had already discussed a fundraising idea themselves. So together we painted a giant sun to place gold and silver coins on. On Friday 22 January, Ms Mc Keon`s class were very busy bringing the sun down to the hall and helping the other classes place the money on the it. The sun was filled approximately six times! Ms Mc Keon`s class were exhausted after counting the money all day but it was worth it. In total we raised an astonishing €5,300.

Now if you don’t think that’s a lot, that amount of money could buy food, drinks, medicines and even shelters for the people of Haiti. Sorcha and I had a great time making the sun and the rays and the whole class enjoyed helping with the counting.

We feel we have to say thank you to Ms McKeon for helping and supporting us, to Mr. O’ Doherty and Mrs. Buckley for helping the classes place the coins on the sun and to Ms Leahy and Lynn for helping us count the coins throughout the day. But most of all we couldn’t have done it without the pupils and parents of St. Patrick’s who brought in all the money to help Haiti. Thank you! 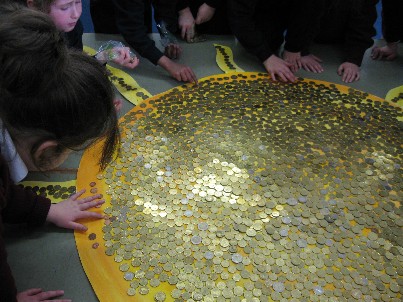