Mrs. Martin and Ms. Ryan have prepared this great presentation outlining all their exciting science work!

Friday March 29th was the day of our Easter Holidays.
Unfortunately it was “ag stealladh báistí” and we were all feeling a little wet & miserable in school until…………….

MRS. MARTIN DECLARED IT ‘Fantastic Friday’
It was soon a day of cutting, gluing, blowing up balloons, sticking wires in batteries & discussing various principles all in the name of…….Science

Here is a sample of what took place that day.

When certain materials are rubbed together they make static electricity. The ‘electrons’ in each object (e.g.: a balloon & your hair) rub together –they gain & lose negative & positive charges. ZAP!

Niamh & Aoife demonstrate  how ‘static electricity’ can make balloons stick to the board. 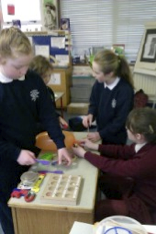 Orla, Jodi & Robyn were hard at work also in the ‘Balloon Inflation Department’. (You can also see Mia experimenting with all kinds of Magnets). 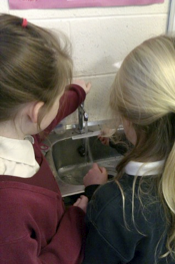 Sophie & Amy discovered even more ways of making water dance having created static electricity on a comb by rubbing it on a woolly surface first. 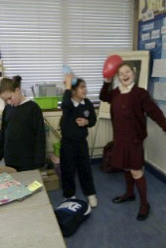 More important still was the “work” going on between Ellie & Casey. Perhaps they have just invented the first ever ‘Static Electricity Dance’!

More Experiments: Building circuits.
Batteries are made of cells, positive + and negative –
Electricity (energy) is carried from the battery through the wires to the bulb. The bulb turns the energy into heat and light. 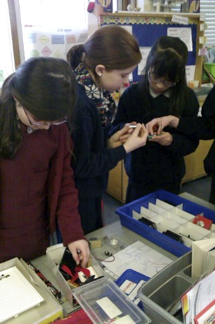 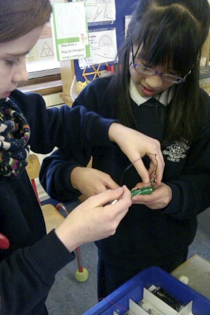 Emily and Xue-Wei built a basic circuit using a battery, a bulb, a crocodile clip & a piece of insulated wire.

Della in deep concentration she used 2 batteries & 2 pieces of insulated wire to light a little bulb. 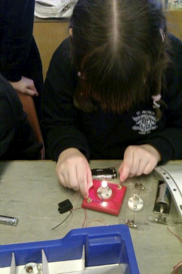 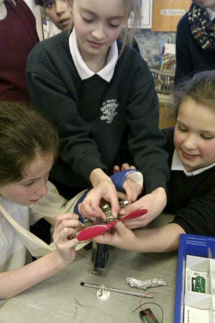 Melanie, Aoife and Jessica introduce a propeller into their circuit. Their next project will be the new 4 passenger rocket to Mars due in 2030.

Orla built a mini car and used magnets to move it. No more petrol bills! 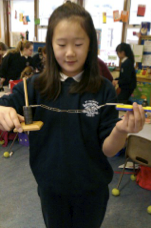 In Ms. Catterson’s Class we have been researching the Vikings.

We worked together on group projects. We spent a lot of time learning about and researching different elements of how the Vikings lived.
We were divided into 6 groups. The topics were:
Homes
Food
Work and pastimes
Travel
Clothes
Gods and beliefs

We drew fantastic pictures of Vikings; then used various types of fabric and fibre to make clothes for our Vikings.
We learned about Runes, the Viking alphabet. We used metallic crayons to write our names in Rune.
We used clay to make Viking Longboats! We modelled and shaped them and left them to dry. Once dry we painted them and made sails to finish them off. They look very impressive.

Our trip to Dubray Bookshop
We were very lucky to be chosen to go to Dubray Bookshop to meet the author Judi Curtin. We walked down the main street and actually passed her out on the way, which we didn’t know until Judi arrived and told us!
She told us all about herself. She was a teacher first, but that she had always wanted to write books. She started writing ‘Alice Next Door’ and from that she was hooked!
She showed us an old doll that she had gotten for her seventh birthday. It was very raggedy and she had pulled all her hair out because she was annoyed she’d gotten a doll instead of books!
She also showed us the covers of her different books and the covers of her books from different countries around the world. She signed bookmarks and also gave everyone a pencil and a Judi Curtin bookmark.
Una’s Mum, Aoife, came with us and took lots of great photos. Thanks Aoife!

Christmas Art
In the lead up to Christmas we were very lucky to have Keelin, Freya’s Mum, come to our class to do Christmas art with us! The girls made lanterns and Christmas cards with Keelin’s excellent guidance. The girls brought in old glass jars from home and they used lots of PVA glue and coloured tissue paper to decorate them. Once dry they decorated them with lots of glitter!!
Using templates the girls cut out Christmas bauble shapes in tinfoil. They added coloured tissue paper for decoration. They then stuck these on to black card and used metallic pens to write a Christmas message. They turned out beautifully! Thanks to Keelin for spending lots of time and energy with us, and for making our Christmas art very enjoyable!

A visit from an archaeologist!
We were very lucky to have an archaeologist visit our class! Eleanor’s Mum, Sharon, came in to talk to the three Fourth classes about her work as an archaeologist. She showed us lots of artefacts that she found on one of her digs. The artefacts came from excavations in Exchange Street, Dublin in 1997. These included: plates, sewing needles and coins!
She also had lots of drawings of various artefacts. She explained that they were all drawn to scale and a drawing of one artefact could take hours to do because of all the fine detail. All the girls got to take turns looking at the artefacts and drawings. It was a great afternoon in Fourth Class, many thanks to Sharon for this!

In Mrs. Martin’s class, we decided to cook flapjacks having found a recipe for Flaky Flapjacks in our English book Onwards & Upwards.

After a few experiments we substituted the cornflakes in the recipe with oatmeal. Let’s see how we got on. 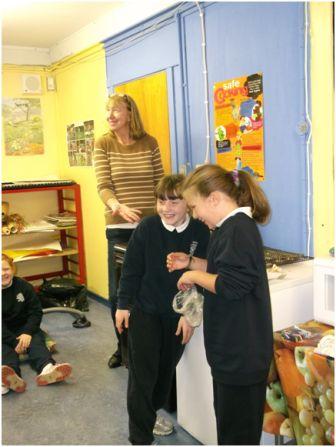 Jessica and Amy had a fit of the giggles while greasing the tin. Anna looks on in despair! 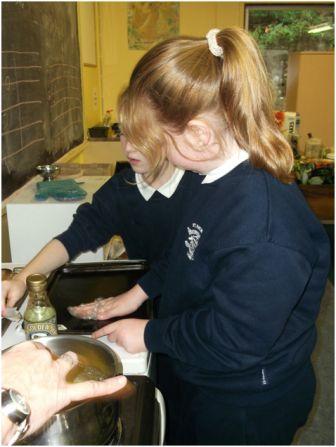 Orla and Mia concentrate on the job.

Here we are reading out the recipe. Listen up! 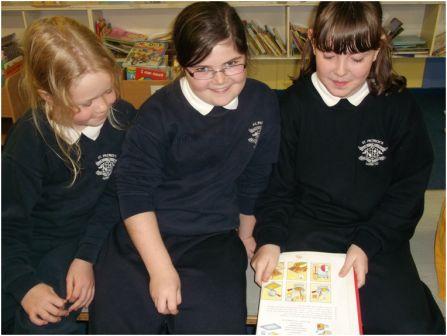 One tray of perfectly formed flapjacks going into the oven at 180° Celsius. 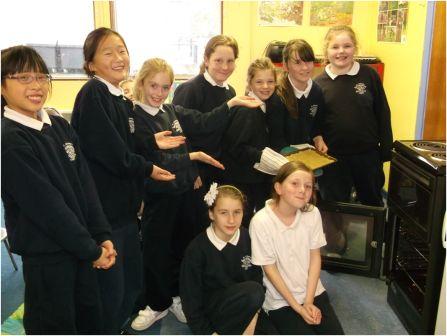 1.Melt the butter, sugar & golden syrup in a saucepan

2.Add the flakes & the salt. Mix together well.

3.Grease the shallow tin with a little butter. Put the mixture into the tin.

5.Using oven gloves remove the tin from the oven. Cool for 2 minutes.

6.Cut into fingers while still in the tin.